Posted on September 6, 2022 by kethuprofumo 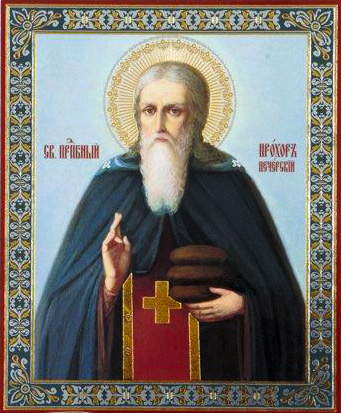 Saint Prochor Lebedn’ik/the Saltbush Maker (  -1107) is the monk, the Saint & the Miracle – Worker of the Russian Orthodox Church.

Too little is know about his childhood. His hagiographies tell about him already as a monk who was pious & very ascetic. He had nothing but water & bread he learnt to make from a plant of saltbush that was a wild herb in Russia. His skill of making flour from saltbush gave him the name Lebedn’ik/Saltbush-Worker.

That was a period of constant wars in Russia. Together with them other calamities including a widespread famine took place. It made common people to use saltbush to make bread but it was bitter. They addressed to the Saint Prochor begging him for bread. He never refused & managed to feed everybody who came for help. The bread was delicious as the Saint blessed it before giving otherwise it was hard & bitter. Monks of his fraternity became very jealous & decided to steal some bread to be convinced that blessing of the Saint Prochor was a Divine miracle. Indeed, the taste of the stolen pieces was unbearable. That was the first miracle that made the monk Prochor famous.

The second miracle was him amazing capability to turn ash into salt. The Saint blessed ashes, they became salt & he gave it those who were in need. Rumors about this wonder reached Prince Svyatopolk (1050 -1113). There was a great lack of salt due to constant wars so when the Prince heard about a monk giving salt for free he decided to steal it from him. As a result, the salt turned into ashes & the Prince remained empty-handed. The ashes were thrown away but they became  salt again in several days. Convinced that it was a Divine miracle & learned more about the Saint Prochor’s deeds, Prince Svyatopolk felt ashamed & visited him in person for repentance.

The Saint Prochor & Prince Svyatopolk became good friends. The Prince strengthened his Faith & served well to the Holy Virgin. They made an agreement to bury in person the first who would die, so when the Saint Prochor Lebednik/ the Saltbush-Worker perished the Prince interrupted his military campaign & fulfilled his duty.

Saint Prochor the Lebednik/ the Saltbush-Worker is celebrated on the 10th of February & on the 28th of September.