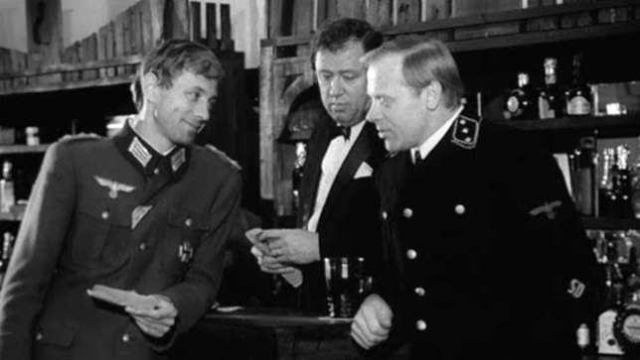 Speaking of war TV’series, I would like to pay your dearest attention, Esteemed Readers, to “Version Omega” made by an Estonian film director Antonis-Janis Voazos in 1975. Movies about the Soviet intelligence service form a special branch of the genre. Besides, all of them are based on real facts & contain plenty of useful documentary information.

“Version Omega” is unusual as it is a TV series. In fact, this type of films was rare in the Soviet Union. In general, 2 series films were the longest ones. “Version Omega” has 5 episodes! Another curious moment is that the movie tells about events happening in Estonia during the Second World War, about a confrontation between the Nazi & the Soviet intelligence offices.

The plot so far: A wounded Soviet agent Skorin arrives to Tallin. There he gets acquainted with Georg von Schlosser who was sent to Estonia after Hitler’s disgrace. Two agents begin a true intelligent battle. There are plenty of interesting methods & tricks Skorin uses to make a trap for Schlosser & to make him serve the Russian intelligence.

Here is a pretty version (5 complete episodes) with the subtitles (you can install any language in settings. Choose translate below the Russian language). In case if the link doesn’t function, please, let me know: Version Omega (1975). Enjoy the movie!