Posted on November 5, 2022 by kethuprofumo 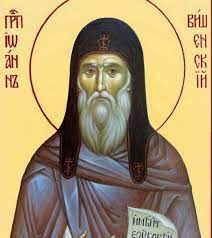 Ivan Vyshenskyi ( approx.1545-about 1630) was another Russian monk who managed to join fraternity of the Mount Athos. He was born in the Southern part of Russia, (the Ukraine nowadays), belonged to the Commonwealth of Poland that epoch. He was born in Sudova Vishnja, an Orthodox town of the Lvov Region. He got a good education but was forced to become a monk as he disliked the political situation.

In 1570s he became a monk the Athonite. Due to his erudition & wit he supported relationships with various Orthodox fraternities in his native lands. His life differed from a routine of an ordinary monk:it was full of writing  & active participation in the church events.

His literary heritage is significant: 16 spiritual &  didactic books written in a polemic style. He wrote about the church problems, criticized spiritual wounds of both branches (Orthodox & Catholic), called upon apostates for penitence. He presented his own vision of a blessed State based on the theory of the State of the Saint Spirit so common in the church circles of the period. At the same time it had certain similarities with ideas expressed by Thomas More in his famous “Utopia” (1516). His last work named “Disgrace of Thought” (1615-1616) is a vivid encyclopedia of a hard peasant’s life.

5 Responses to Saints of the Russian Orthodox Church: Ivan Vyshenskyi