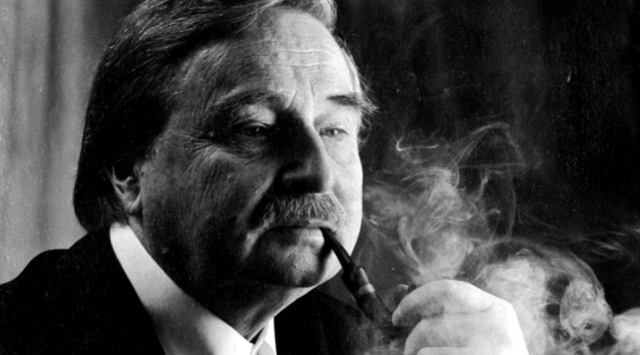 Esteemed Readers, some of you already know that my favourite writer is the Serbian post-modern genius Milorad Pavic (1929-2009). Finally I launch the year of his writings in my blog. I hope you will be curious to learn about this amazing Serbian gem of the 20th century literature.

Milorad Pavic was born in Belgrade October 15, 1929 in a rather intellectual family. Many of his ancestors were writers. That period Belgrade was the capital of the Kingdom of Yugoslavia, so the writer was born as a Royal subject & perished in a free democratic country torn apart by the NATO in hot 90s. He graduated with the bachelor degree in literature (the University of Belgrade) & later obtained a PhD in history of literature (the University of Zagreb). Besides he was a professor at the Department of Philosophy in the University of Novij Sad. (1977-1990).

First writings of his were published in 1970s. They were sets of poems Palimpsests (1969) & Moon Stone (1971). As well he started writing short stories, however due to particular style & plot they were not welcomed for publishing. The Dictionary of the Khazars (1984), – it took Pavic seventeen years to complete it, – became his first serious success & the break through in the publishing world. This book alike the rest of his works is unique. It is written in a form of a dictionary as non-linear text & offers readers an opportunity to play with the story, to make their own reading.

His second & my favourite novel The Landscape Painted with Tea (1988) was made as a crossword puzzle. In fact, you won’t find any book written by this genius writer made in an ordinary manner. As well as you will hardly discover ordinary thoughts or style as Milorad Pavic was a talented aforism maker. Here are some ones translated:

Milorad Pavic was an outstanding specialist in the Serbian baroque, translator of Alexander Pushkin & Lord George Byron & many times mentioned as a potential candidate for the Nobel Prize in literature. He perished  in Belgrade in 2009.