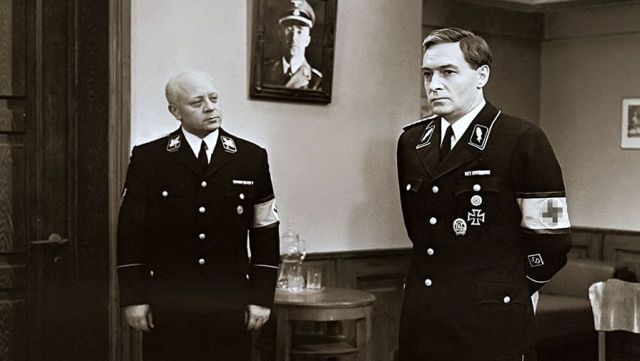 This year we have been celebrating the 75th anniversary of victory over fascism. The URRS was the true winner in this terrible battle, but, unfortunately, modern global forces do their best to erase the role of Russia in the World War II, to erase sufferings & calamities the nation has passed. I will make a special set of posts dedicated to the War movies in 2021 as, in fact, there are so many films made on this important issue & all of them should be mentioned.

For now, let’s insight one of the most interesting, to my mind, film, even TV series, (this genre was almost unknown for the Soviet cinema, we knew about series only in 90s when first Mexican & Brazilian telenovelas appeared on TV): ‘Seventeen Moments of Spring/Semnadtsat Mgnovenij Vesni’. Made in 1973 by Tatiana Lioznova on the novel by Yulian Semyonov, it depicts the spirit of the nazi Germany very realistically.

The plot so far: the story tells about the Soviet secret agent Maxim Isaev who works in Nazi Germany under the name Max Otto Von Stierlitz. He works right in the heart of the NSDAP. The movie shows a difficult life of the secret agent, his colleagues & friends. Stierlitz must always pass difficult psychological war not to be uncovered, every day is risky for his life & the deed he performs with diligence. At the same time, even staying in the heart of evil, Stierlitz doesn’t lose his human qualities: he saves & sympathizes with people who are in need.

The movie is also famous with its epic song calling us to appreciate any moment of our existance: “Don’t underestimate seconds. One day you will realize that. They whistle at your temple alike bullets… Moments, moments, moments..”

By lucky chance, there is a wonderful English subtitle set on Youtube. So, enjoy watching, Esteemed Readers!

And here is the link to the song, solemn & worthy of listening to!