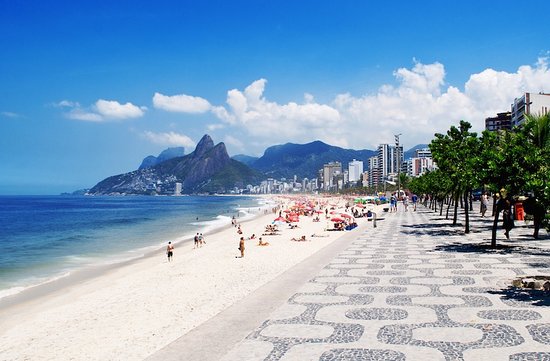 The muse of the song was a mysterious carioca of about fifteen years old who every day was passing by a bar where the composer & the poet-diplomat (an artistic definition of Vinicius de Moraes) spent their time. Her charm inspired the creative imagination of the last one, this girl seemed to him a perfect example of the Brazilian beauty: “carioca, bronzed, a blend of a flower & a siren, full of light & grace, keeping some sadness in her glance…” That was the essence of a mysterious Garota de Ipanema.

For the first time the song was presented in the restaurant Au Bon Gourment, Copacabana in August 1962 in occasion of the first artistic performance of Vinicius. The success didn’t take long to appear. Already in 1963 it was recorded in New York with the English title  The Girl from Ipanema. The most known English version was originally made by Stan Getz & João Gilberto. In 1965 Garota de Ipanema won the Grammy Awards.

This bossa nova composition is considered to be a sample of perfect jazz & bossa nova music. It has been performed by numerous famous singers in various languages. Even at present Garota de Ipanema remains one of the most performed music piece, proving that a poetic praise of the female beauty is out of time. It does not depend on fashion, the political current or the economical situation. This piece by Tom Jobim & Vinicius de Moraes reflects the true sense of art, its Divine origin & our human necessity to be in contact with it again & again.