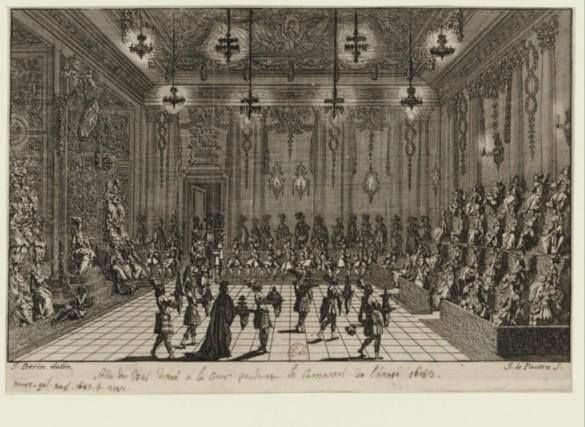 Mercure Galant published plenty of information about Venice’s Carnivals every year. However those arranged at the Court were no less solemn, magnificent & entertaining.

Here is an abstract about Carnival 1683 took place at Versailles:

“…I pass to Divertissements that at the same time had the greatest & the most brilliant Court of Europe. When Souvereign works without rest, Courtiers & all the Subjects can fully dedicate themselves to entertainment. That is what is going on all the Winter in Versailles. Every soirée of the week is marked with different pleasures…The entrance (to Bals) was allowed only im Masks, & only few People dared to appear undisguised unless they were not of a distinguished rank. As these disguises were made mostly for entertainment than for displaying a false magnificence, they matched the Court perfectly and there was no need in ordinary garments…This year one had to mask under  pleasant garments, demonstrating the invention, the genius & the spirit of those who wore them & who made them. But they did even more. In the past when people disguised to go to a Bal, they did not bother to return & this year the majority made themselves to go to change Garments from eight to two times. Somebody regards this as a grotesque that does not have a name, because it is no more than a result of the imagination of their Inventors.        …Monseigneur de Dauphin (Louis XIV’s son) changed from eight to two times every evening and Mr Berrin had to demonstrate all his genius to dress him & all his vigilance to do it fast, as there was little time from one Bal to another. As this Prince did not want to be recognized there was no exact Personage he invented to disguise himself, & very often nobody was able to guess if the one they beheld in the Mask was tall or short, portly or thin. Sometimes he wore double Masks or Wax Masks, put perfectly on the first Mask, and when it was time to unmask, ones believed that they saw a true faced, deceiving everybody…”