Posted on September 27, 2017 by kethuprofumo 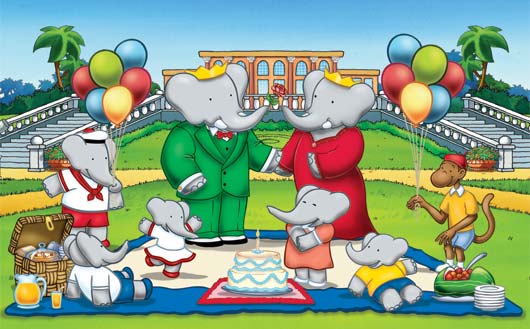 Esteemed Readers, I wish to go on a bit an elephant theme, so precious to me :-), & to tell you about Babar. However, many of you should be familiar with this amazing elephant. If be more precise, with a character invented by Cécile de Brunoff & designed by her husband Jean Brunoff  in the beginning of the 20th century.

No matter the story background is so French & often deals with rather national topics, I find it very educational, deep & smart. Babar himself is depicted as a very kind & noble elephant, who has passed various misfortunes before gaining success & a peaceful life. As well he had to study a lot to become the true king. He is a big progress lover, nevertheless he has a deep respect to the environment & doesn’t promote unlimited abusing of nature unlike his opponents, stupid & ignorant rhinoceros. Babar’s milieu represents many positive moral aspects in the way children could catch them easily, while rhinoceros do various shadow sides still staying good in the depth of their souls. I think it’s one of the best Babar’s traits: to show Evil in not an aggressive, an optimistic way, pointing to children that one can change to the better if he wants so. Besides, I find Babar’s story very Christian because it displays an evolution of Spirit through difficulties & obstacles of life.

There are some animation series based on Babar’s story. A full length 1989 movie is the most attractive, to my mind, due to its intense plot & wonderful drawing. It makes ponder on many things, among which balance between progress & the environment are in the foreground.